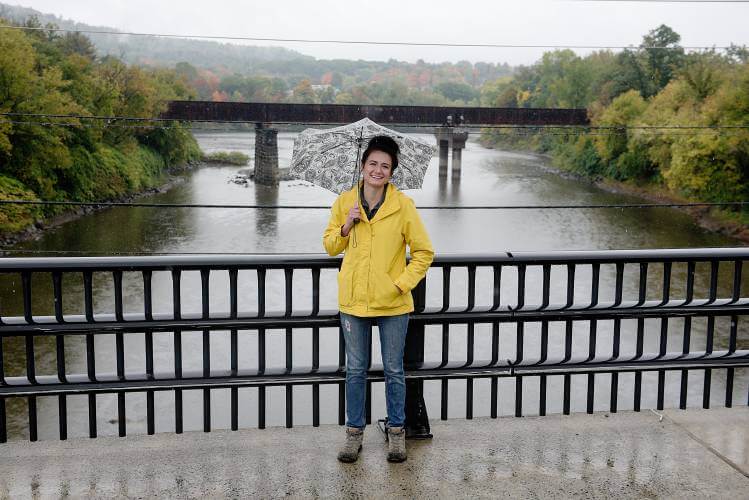 NORWICH — While she was working with an all-girl high school trail crew, Kaitie Eddington, program manager for the Upper Valley Trails Alliance, told a story about how she’d tried to give herself a middle name when she was 8.

One of the students suggested she hold a contest to come up with one.

“I can’t remember who made the suggestion,” Eddington recalled. “It was a unanimous, ‘Yes, do this.’ ”

So she did. As a fundraiser for the nonprofit Trails Alliance, Eddington has given the public a chance to weigh in on what her middle name should be.

The contest started in August with a list of five names. A donor could add a name to the list for a contribution of $50, and the list grew to include a few outlandish possibilities.

“Some of them were absurd,” she said in an interview. “Andromeda Quesadilla,” for example.

“My aunt submitted the state fish of Hawaii,” Eddington said.

“Reef triggerfish” would be strange enough as a middle name, but her aunt’s submission was in the Hawaiian language: “Humuhumunukunukuapuaa.”

Every week, names with the fewest votes, including the above, have been removed, a process that will continue until the end of the month. Right now, these are the remaining possibilities:

To Eddington’s surprise, the two leading vote-getters are the most straightforward: Marie and Lark. Voting is open until Oct. 31, and each week the two names with the fewest votes will drop off the list until only two remain. Peach! and Passport are at risk of being dropped on Monday.

“I was expecting one of the sillier names to just skyrocket,” she said. But unlike other crowdsourced naming contests (who can forget Boaty McBoatface?), people seem less disposed to pin an oddball name on a person, she said.

Any of the remaining names would be fine with her, though Hike-ity Hike Hike is on the far side of fanciful.

“Danger” was her husband’s idea. Adam Eddington is in his final year at Dartmouth’s Geisel School of Medicine and hoping to stay on for his residency.

“Part of me likes the idea of being an old woman with Danger as my middle name,” Kaitie Eddington said.

It costs $10 to cast a vote, and unlike some other elections, which we won’t talk about here, you can cast as many ballots as you like in this one, so long as you chip in your 10 bucks. Most of the name suggestions and votes have come from friends and family. Votes can be cast on Venmo, the online payment platform, or through a link on the Trails Alliance’s website.

So far, the contest has raised about $1,200 for the Trails Alliance. The organization has had to cancel three major fundraisers, so the middle name contest is meant to make up for them, somewhat, and to add some cheer. Eddington organizes the events.

“It’s been a bit of a bummer for me,” she said. Calling people to make arrangements “makes me feel a part of the community.”

Eddington grew up and went to college in southern Utah. Moving to the Upper Valley in 2017 was her first trip to New England.

Long has she rued her lack of a middle name. Neither she nor her three sisters has one. Her parents felt their surname, Woodmansee, was enough of a mouthful. (Her lone brother got a family middle name, though: Alonzo.)

When she reached the third grade, Kaitie Woodmansee decided she was missing out: Many of her friends had middle names.

She started to pester her mother about it and finally, one day, while they were in a bookstore, her mother told her to go look at the authors’ names for possibilities.

While her mother had some peace and quiet, young Kaitie came across an author named Satin. “I was like, ‘What a classy name,’ ” she said.

She thought that all she needed to do to make the name her own was to start using it, so she wrote it out on all her school papers.

All seemed to be going to plan until her teacher called her parents. ” ‘Uh, I’m a little worried about Kaitie,’ ” Eddington said.

Turned out, third-grade spelling being what it is, that she was writing her new middle name “S-A-T-A-N.”

Duly mortified, she ended her quest, until her trail crew revived it.

For more information about the contest go to uvtrails.org.

Written by Alex Hanson and published on October 4th, 2020.